This item qualifies for Free Shipping!

Console and Power Cable only. No controller included.

Get everything you’ll need to prevail in a new era of Call of Duty. Featuring a massive 1TB hard drive and in-game sound effects, the console is emblazoned with Sentinel Task Force iconography. The wireless controller looks like an artifact from the powerful battlegrounds of the future. You get the Digital Edition Personalization Pack, Limited Edition exoskeleton, and the Advanced Arsenal, which includes a bullet brass exoskeleton and the EM1 Quantum custom weapon. The bundle also includes the full game download of the Call of Duty: Advanced Warfare Day Zero Edition, with early access and double XP on November 3, plus two custom weapons: the AK-12G Assault Rifle and Crossbow-B2.

All units are thoroughly tested and fully functional, regardless of Grade chosen. Grading is purely cosmetic.

Harnessing the power of next-gen platforms, Call of Duty: Advanced Warfare brings players into the battlegrounds of the future by boasting a new hi-tech, advanced arsenal and ability set, arming players with all-new equipment, technology, perks, and vehicles like hoverbikes and highly specialized drones.
Players can also choose between standard ammunition and an all-new class of directed-energy weaponry that enables totally new gameplay dynamics.

House of Cards star Kevin Spacey plays Jonathan Irons, the founder and president of the Atlas private military corporation and a main character in Call of Duty: Advanced Warfare.
After the death of his son Will Irons, he has become obsessed with power and vengeance against anyone who he blames or anyone who stands in his way, including the governments that hired his company 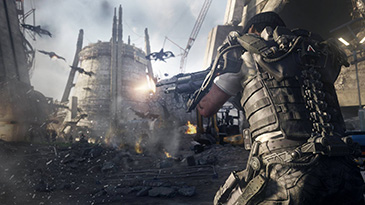 Call of Duty: Advanced Warfare takes place in a plausible future in which technological progress and today's military practices have converged with powerful consequences.
In this carefully researched and crafted vision of the future, Private Military Corporations (PMCs) have become the dominant armed forces for countless nations outsourcing their military needs, redrawing borders and rewriting the rules of war. 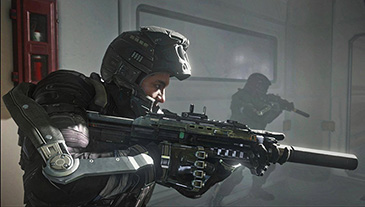 Powerful exoskeletons evolve every aspect of a soldier's battle readiness, enabling combatants to deploy with an advanced lethality and eliminating the need for specialization.
The introduction of this gameplay mechanic delivers enhanced player movement and verticality through boost jumps and grappling, covert cloaking abilities, and biomechanics that provide unparalleled strength, awareness, endurance, and speed. 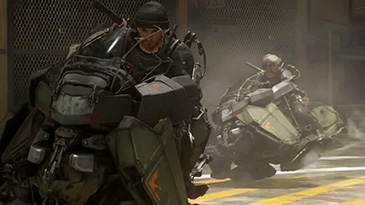